Typically, MNICS agencies respond to several hundred wildfires each spring. Although much of the state is currently breaking snowfall records for mid-April, on this day two years ago Minnesota’s wildfire season was vastly different. A few statistics from the Minnesota Interagency Coordination Center (MNCC) Intelligence office: 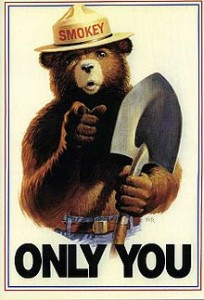 In Minnesota it’s 2018 Wildfire Prevention Week, April 15-21. When the snow melts and spring actually arrives, these campfire and wildfire prevention tips will come in handy. According to Minnesota DNR, the number one cause of wildfires in the state is due to debris from escaped fires. “If it’s predictable, it’s preventable.”

Over the weekend, the Bureau of Indian Affairs (BIA) reported a 2,144-acre fire in Clearwater County with creeping and smoldering in hardwood areas. No structures were threatened. Conditions there are vastly different from most other parts of the state where prescribed burning has been ongoing for a few weeks and burning permits are required.

This morning three DNR staffers left for the 246,000-acre Rhea Fire in Dewey County, Oklahoma where a state of emergency was declared last week due to ‘historically’ high fire danger. Pilot Luke Ettl and Air Tactical Ground Supervisor (ATGS) Dan Carroll and ATGS(t) Dean Krause will have air attack (‘bird dog’) duties in the DNR Quest Kodiak. A Red Flag Warning is issued for April 17 for a large portion of western Oklahoma, where new fires are likely to exhibit explosive rapid rates of spread, and ongoing fires will require extensive patrol and mop up to prevent escape.